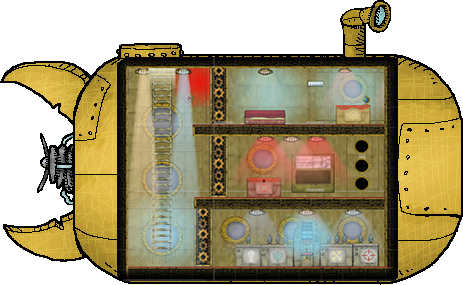 The Perle is the third and last free submarine in We Need to go Deeper. It is the second smallest submarine, bested only by the Espadon in that aspect. It is very similar to the Crevette, having the same consoles as it. The Perle, however, only has 40 hull points, but has an upgraded EMP and Shield. Due to it's small size, it is often considered the submarine best suited to small crews. (Recommended Players: 2)

This vessel is unique due to the fact that all rooms are stacked on top of each other and connected by a long staircase in the left. This can help surviving for a while in a flooding submarine, as it's easier to remove water from the upper decks by simply opening their doors.

This compact little fella puts everything you need in between one big ladder and a whole lotta power, making it perfectly suited for bite-sized crews. It may be small, but what it lacks in speed and armor it makes up for in electric boogaloo. The Perle comes equipped with upgraded shields and a harder-hitting EMP, making this a safe option for first-timers.

The Perle is slow and frail, but as it has improved shields, it can sustain damage more effectively if power is allocated to shields. Its small size means that flooding can become a problem very quickly, and the Engine Room in particular tends to quickly fill with water, meaning a Water Pump can be very effective in this submarine. If you and your crew is in a bad situation, don't hesitate on using the EMP. which begins upgraded in the Perle, and will be able to kill most enemies if need be.