From We Need to go Deeper Wiki
Jump to: navigation, search 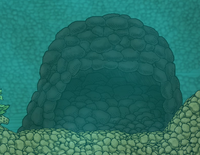 A cave in the Atlantic Waters.

Underwater caves are located randomly throughout your map, and are able to be entered by steering your sub into the cave. Once inside you can disembark through the hatch located in your submarine. Caves are procedurally generated. Inside you'll find Enemies, treasure chests, upgrade boxes, barrels, and lots of gold!

Lootable Bodies are the remains of deceased explorers and divers that met their ends inside the Caves and Lairs of The Living Infinite. Even after death, their skeletons are still holding tightly to the tools and weapons they possessed when they were alive, and whoever finds them can take it and put them to better use.

If the player is already carrying an item or has a Backpack and is carrying two, they will drop the one they are currently holding in their hands to pick up the Body's item.

Wooden chests found in caves can contain different pickups or rarely, an enemy.

Batteries are rarely found in caves and can be carried and placed into a Power Console, temporarily adding 1 power to it, which lasts until the battery runs out. The Power Consoles allow for as many batteries to be placed on them as their maximum amount of power. Items cannot be used while carrying it and attempting to use them will cause the Battery to be dropped.

Barrels inside the caves can be destroyed and contain different pickups. Rarely, a Hermit Crab will be hiding inside it and will attack the players once disturbed.

Rubble is found inside caves and can be destroyed and contain different pickups or relics.

A Lavish Chest is always found at the end of the top cave layer.

Reality Collisions are rarely found in Caves in Awakened Mode. These resemble square, fragmented piles of rocks glowing with a strange green energy.

The Cave Generator at work

Caves are generated by the Cave Generator, which will determine the amount and location of items, Barrels and Treasure Chests and how the cave is structured. Sometimes, caves will have a top and bottom layer, the top one containing the Lavish Chest and being where the submarine "parks" and the bottom one containing additional loot. Both layers can generate different floors, up to a presumed maximum of 4. Caves have a much lower chance of producing long or second floor caves than small caves, with the probability increasing the deeper you go.